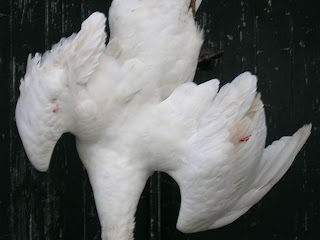 This show concerns itself with depictions of extreme events, extreme realities, notably paintings of the jumpers from the twin towers, which are based on downloaded photographes from the net.
Other sequences depict war, torture, rape, and privation in a pop figurative manner. Finally, there are paintings which allow the jumper figure to morph into the transfigurative image of a Yakut shaman based on nineteenth century photographs. The linkage between the jumper and the shaman is a personal one, with the jumper symbolising existential fallibility and the fall, while the shaman represents is its spiritual translation

Much contemporay art is seeking relevance in the face of terrible events seeks to excite an anlogous terror - lip sewing, eye sewing, extreme performances or the creation of extreme environments. The other option is to aestheticize the terror - just think of images of the crucifixion - to make it appoximate, quiescent, beautiful. Alongside these approaches we have as humans the desire to transfigure suffering, to define it as a clarifying, majestic apotheosis.

The Video Installation is in two parts, the first describes a double goose killing, the second a shaman - like exploration of their deaths. Only a percentage of us will substract life - we are happy to leave killing to others though we distance ourselves from the abattoir or mythologize the sociopath. The show questions whether these positions are replete with a diffident and hardy dishonesty as to the manner in which are witness to the world, and forgiving in terms of a critique of our own acts.

Posted by Ennistymon Courthouse Gallery and Studios at 11:53 AM