Following a successful preview at the Cork Film Festival the North Clare made film SEASIDE STORIES... had it's WORLD PREMIER at  the COURTHOUSE STUDIOS GALLERY on DECEMBER 12th at 5 and 7pm 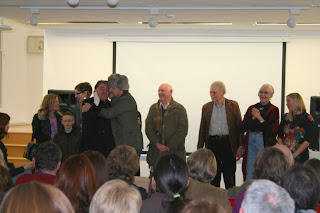 The Writer/Director Fergus Tighe was at both screenings as most of the actors including Fionn de Búrca (11 years) of Kilcornan who plays Locky, the boy around which the story swings. The film was made over the past 3 years from Gallivanting Media's base at the Courthouse Studios & Gallery 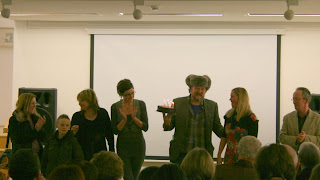 Top picture: Mick Flynn who wrote the song "Liscannor Bay" in the movie getting a hug from Fergus

Locky is a boy who's been flourishing since his mother, Anna, gave up the drink three years ago. When Anna's old boyfriend Mick gets out of prison she falls back into her old ways of daytime drinking while Locky runs wild in the streets with his friend Callo, played by Caolann O'Dwyer 13. Meanwhile Sally arrives home determined to tell Locky that she is really his mother. This does not go exactly as planned and sets the scene for a series of events that changes the lives of all involved. 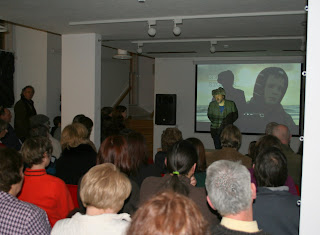 
All praise for Fionn de Búrca!

Posted by Ennistymon Courthouse Gallery and Studios at 4:54 PM