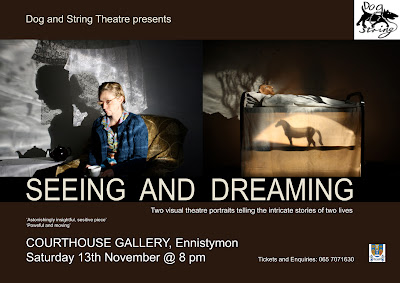 Two visual theatre portraits telling the intricate stories of two lives.
‘Astonishingly insightful, sensitive piece. I think, as it exists, is near perfection – a dance between performers. It is both complete and complex.’
THE SHOW IS SUITABLE FOR ADULTS AND CHILDREN AGED 10 AND OVER
Seeing and Dreaming is a new piece of visual theatre that tells the intricate stories of two lives. Visual artist and puppeteer Sarah Fuller and performer Vanessa Earl are collaborating to bring these people’s stories to life using shadows, objects, puppets and people.
Dorothy is eighty, lives alone in a Victorian house in Birmingham. She has one eye, no teeth and a soft spot for Starsky and Hutch. Michael is eighty-eight. Gnarled and bed ridden, he dreams of dancing and wild horses.
Dorothy’s story is told through the memories of her eight-year old grand-daughter who spent many weekends alone with her. This is a portrait of older age told through the eyes of a child.
Michael’s story focuses on the last year of his life spent in hospital. This portrait explores his changing states of mind, slipping between dream, reality and memory. This is a man preparing to die.
Vanessa Earl 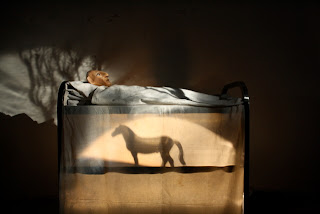 Trained at the Jacques Lecoq International Theatre School and the Laboratory for the Study of Movement in Paris. For sixteen years she has worked professionally making theatre. Among others she has worked for the Clod Ensemble, Augusto Boal and Theatre of the Opressed, the Royal Shakespeare Company, Tom Morris and the Battersea Arts Centre, Theatre de Complicite and the National Theatre.
Sarah Fuller
Graduated in Textile Design at Central St. Martins College of Art and Design London. In 1995 she established Dog and String Theatre and since then has devised, performed and toured shows for childrens audiences both nationally and internationally. Her visual art has been exhibited widely throughout Ireland. She has considerable experience working in Arts in health and has been exploring the therapeutic possibilities of puppetry in relation to dementia.
Posted by Ennistymon Courthouse Gallery and Studios at 2:59 PM