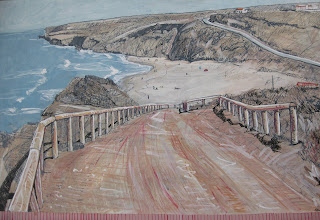 Rachel Burke is exhibiting a series of new paintings from the west coast of Portugal, that echos the coastal environment of Ennistymon and also reflects on the memory of a trip away. The paintings of the sea induces a sense of
reflection and nostalgia , the open vastness and ever changing landscape of the ocean enables an inner personal exploration . The work also deals with the relationship between land and  sea, the tension and balance between the two elements. There is an ambiguity between reality and imagination of remembered places created with the sketchy line from dip pens sitting on imaginary colours.
Burke works mainly with acrylic inks on canvas, using dip pens and brushes, to build up layered images. Ideas of identity and nostalgia are explored through the importance of line, texture and the familiarity of pattern. These paintings embody a sense of the fleeting of time. Confident draughtsmanship combined with a subtle palette of painterly intimacy creating images suggestive of the intangible realm of visual memory.

Originally from Cork, Rachel Burke is now a Kilkenny based artist. Since graduating from the Crawford College of Art and Design eleven years ago, Burke has exhibited extensively, and has many pieces in both private and public collections including the Northern Ireland Office of Public Works, Republic of Ireland Office of Public Works, AIB, Credit Union, University College Cork and Kilkenny Educational Centre. Her paintings have been selected to participate in the 180th, 178th and 175th Royal Hibernian Academy Annual Group show. 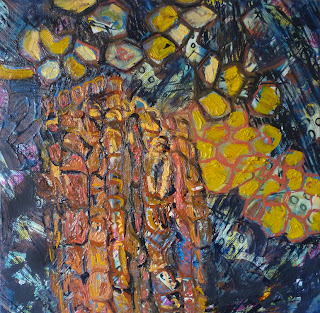 Erin Treacy recently returned to the states after completing a Fulbright Fellowship in County Clare.
Being exposed to a wide variety of landscape fuels Treacy's creativity. In addition to her own excursions she has been fortunate to participate in artist symposiums/residencies throughout Ireland, Italy, Italy. The Slovak and Czech Republics, and Finland. Treacy has had numerous solo and group exhibitions throughout the US and Europe, where her work is also held in public and private collections. Following this exhibition at Ennistymon Courthouse Gallery, Treacy will have a solo exhibition in Pittsburgh, Pa, USA at the Boxheart Gallery.
Treacy received her Bachelor of Fine Arts in 2004 with a concentration in painting. She then went on to receive her Master of Fine of Arts from the University of Massachusetts, Dartmouth in 2007.  Treacy currently lives and works in Sunnyside, Queens.
Treacy’s mixed media paintings focus on creating new abstracted ‘environments’ out of fragments of memories concerning place.
New work from this year introduces architectural imagery into my paintings for the first time.  Stairs, bridges, walls, fences, windows, doors, and ladders are now interlaced into the abstract compositions. These connectors, entrances, and borders are loaded with many connotations. Bridges, stairs, and ladders create union between disparate spaces, they offer paths to overcome physical obstacles that keep you from going from point A to point B.  Fences, walls, and windows enclose a space offering protection, yet the associated confinement of these structures can also be associated with restriction and possession.
These dualities reflect upon her past work where she focused on the fantasy and falsity in memory. By referencing a mental index of locations that are simultaneously everywhere and nowhere, she examine the idea that shifts in time and overlaps in memory result in a disjointed timeline.
Posted by Ennistymon Courthouse Gallery and Studios at 6:44 PM