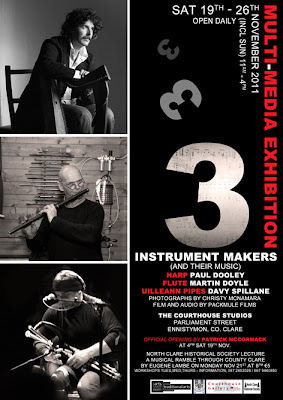 3 Instrument Makers
19th – 26th Nov.
open 11am – 4pm daily (inc Sun)
Featuring the crafted instruments of
Harp Paul Dooley
Flute Martin Doyle
Uilleann Pipes Davy Spillane
Official opening
by Patrick McCormack
on Saturday 19th November at 4pm
November 19th - 26th 2011
open 11am-4pm daily (incl Sun)
In conjunction with the year of the craft the 3 Instrument Makers exhibition will offer the visitor a multi media experience featuring the musical instruments crafted by Paul Dooley, Martin Doyle and Davy Spillane as well as selected recordings of their music.
All three are internationally acclaimed artists who live within a ten mile radius of Ennistymon and were invited to partake in this exhibition which aims to honour and acknowledge their work.
Included in this exhibition will be audio interviews and a 15 minute commissioned film by ‘Packmule Films’ - Dylan Phillips and Marcus Campbell, documenting each of the musicians at work in their workshops
Photographer Christy McNamara, well known for his photographs of traditional musicians will be collaborating in this exhibition with a series of commissioned photographs.
Paul Dooley is one of the leading exponents of the Irish harp in its historical form and style, having studied the construction of medieval Irish harps in Dublin during the early 1980s. He started his performing career on the metal-strung harp in 1986 and has appeared on numerous CD recordings and television soundtracks his latest recording is called The Harpers Fancy.
In 2005 Martin Doyle moved from Bray to Co. Clare, where from his workshop he makes flutes for musicians worldwide. His love of flute making carries an aspiration for the progression of the craft,
“I like to strive to transcend my capacities and therefore my results. It’s important to me that the contemporary flutes keep evolving and giving us new horizons — that is the real joy of this work! My feeling is that we should never stop striving for the better good in any field of endeavour.”
In the mid '70's Davy Spillane started his uilleann pipe making apprenticeship with Johnny Burke in Bray Co. Wicklow and by 1988 Davy had made his own set of uilleann pipes with Johnny. These pipes are made of sterling silver, African blackwood, ebony and ivory. 1988 being the Millennium Year in Dublin, all the silver parts were individually hallmarked in Dublin Castle and received the Millennium hallmark unique to that year. This is the instrument that Davy has played on all his recordings and performances from when they were made to the present time. This is the instrument that is on display.
In conjunction with North Clare Historical Society there will be a lecture in the gallery on Monday 21st at 8pm by Eugene Lambe, collector of tunes and stories from County Clare.

Posted by Ennistymon Courthouse Gallery and Studios at 12:03 PM