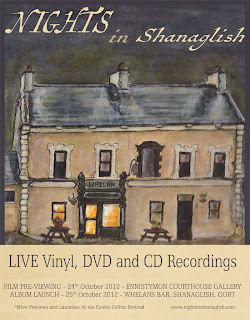 A preview of
“Nights In Shanaglish” DVD, LP, CD, and transcriptions booklet

Paddy Egan and Vincey Keehan are the directors of the project.
www.nightsinshanaglish.com.

8 pm -  preview of the Film “Nights in Shanaglish” (Gallivanting Media) with an introduction by the directors of the project -  Paddy Egan and Vincey Keehan.

At 8.30pm, question and answer session about the documentary for 5 minutes.

9.45 - a performance with some of the musicians from the recording, along with friends of the project from the group "Los Paddys de las ".
No admission charge
From a review of “Nights in Shanaglish” by Tony Lawless (from Tony Lawless's Blog)
Nights in Shanaglish continues a recent trend of live recordings that take place in non studio environments such as kitchens, churches and village halls.  Ideas that have germinated in the minds of musicians over a quiet pint or phone conversation finally take shape and come to fruition.  This is one such idea, and what an inspired one it is.  The idea of live music from a well known pub is not so new.  However in this instance the musicians involved have  sought to really capture the essence of a live session, portraying as it does rural life in .  For anyone that has been to one of these more rounded sessions you will know that they are not simply gatherings of purists playing only traditional music.  The best ones incorporate a lot more.  Their guiding ethos is one of raw, down to earth traditional Irish music, songs, stories and recitations. Nights in Shanaglish also steps beyond the simple CD format and is a full multimedia project which consists of a gatefold vinyl, a DVD documentary on local history and folklore, interviews with local people, footage of the natural landscape as well as the live recording in action.  The idea came from Vincey Keehan and Paddy Egan, regulars at the sessions in Whelan's Pub in Shanaglish, south where the recording took place. It is therefore a community project involving many local people from south and north Clare and has been independently directed and produced by Vincey and Paddy.
(Tony Lawless)
http://tradconnect.com/profiles/blogs/album-review-nights-in-shanaglish.
Posted by Ennistymon Courthouse Gallery and Studios at 2:54 PM