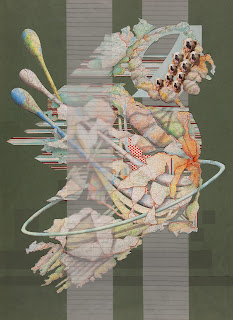 Collages by Machteld van Buren (The .
From Saturday 12 January – 1 February 2013

The theme of the panel discussion is: Questioning Europe’s Future


The series of works titled ‘Circus Europe’ are created by Machteld van Buren in 2012. The eight large collages illustrate how the struggle for survival is being waged in various European countries.

Eight poets were invited to offer their interpretation of these images. The Irish poets taking part in this project are Jo Slade, Frank Golden, Jessie Lendennie and Patrick Chapman.
The Dutch poets are Arnoud van Adrichem, Martin Reints, Lieke Marsman and Peter van Lier.
Publisher Salmon Poetry, based in Co Clare, will publish a booklet of this project in an English edition. The collages are to be exhibited in both Ireland and the Netherlands. 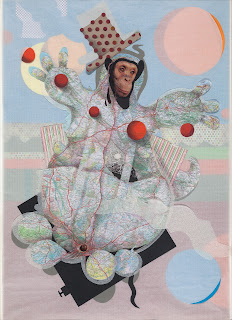 Machteld van Buren is an established artist and her work is in the collections of the Stedelijk Museum in Amsterdam, the Centraal Museum in Utrecht and the Fries Museum in Leeuwarden. (http://www.machteldvanburen.nl/)

In this project she reflects on the tensions and uncertainties that exist in the present-day European Union which, although it is presented under the banner of a common flag, has always been a patchwork of independent nations. The current crisis has made it clear that a ‘United States of Europe’ is still a long way off. In the future, further disintegration is perhaps a more likely prospect than political union. 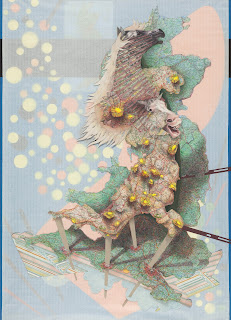 The collages explore how the struggle for survival is being waged in various European countries. Most of the countries are depicted as an animal: the body consists of a map onto which the realistic head of an animal has been superimposed. Great Britain is portrayed with a number of horses’ heads, which form part of the landscape. The awkward juxtaposition of these figures suggests that the UK is not only struggling with its position within the EU, but is also divided by internal strife. Germany appears to be a bird of prey – not the traditional eagle, but a vulture. The juggling acts which these circus animals have to perform to keep themselves going are indicative of how each nation functions. But just how the stunts work is not entirely clear.

Rather than leaving it to politicians to define the Europe of today and tomorrow, it would be good to have artists depict it as well. Given the tone of the debate, alternatives with a playful or visionary element might actually be quite useful.

So let the fun begin: ‘Ladies and Gentlemen, welcome to Circus Europe!’
Posted by Ennistymon Courthouse Gallery and Studios at 2:56 PM