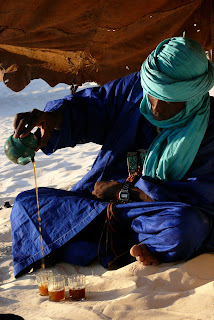 HOT SUN – COLD MOON
An exhibition of photography by Carol Kennedy and Ilsa Thielan
FEB 18 – MARCH 15TH
Official opening : Saturday February 18th at 4 pm by Marie Connole, artist
Two artists, Carol Kennedy and Ilsa Thielan, join forces in a stunning exhibition of
photography in the Courthouse Gallery, Ennistymon, from Saturday the 18th of February
to Thursday, the 15th of March 2012. Both follow their intuition to capture the essence
of moments precious to them.
Ilsa Thielan’s exhibited work is a homage to the people of the Sahara, who she met when travelling to the Festival au Desert about 65 kilometers beyond the legendary town of Timbuktu way out in the vastness of the Sahara. Under a scorching hot sun she camped with them capturing unforgettable moments of desert life and friendship. With her camera she works in a gentle way as if part of her body, her tool, her paint brush. Her portraits radiate a vibrant, passionate energy as well as a lovely spirit. Ilsa’s desert scenes have a mystical remoteness like her camel rider “He came from afar” or her camp “at the edge of the night” where a lone tree reaches out to tents and camels in haunting twilight. Poetry she wrote in the desert accompanies the exhibition. 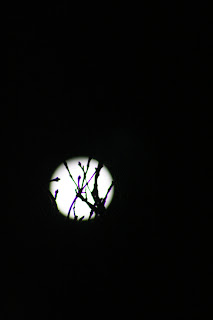 And there are Carol Kennedy’s nocturnal moonscapes creating an amazing contrast to the colourful Saharan scenes. Though Carol’s fascinating photographs are taken in Ireland, the  same cold moon is moving through the night sky in the Sahara. Carol captures the essence
of the ephemeral moment one has to respond instantly to or loose it, her camera merely acting
as an extension of herself. There are the fine branches of a tree touching a full white moon as if  gently stroking a gem stone, or the moon is mysteriously partly hidden in the dark of a landscape. Carol captures glimpses of nature at night in her photographs weaving through the exhibition like another kind of poetry.
The exhibition is opened by artist Marie Connole on Saturday, 18th of February, 4 p.m. Everybody welcome! It runs until 15th of March 2012 in the Courthouse Gallery, Parliament Street,  Ennistymon, Co. Clare. Opening Hours: Tuesdays to Saturdays 12 - 4 p.m.
Posted by Ennistymon Courthouse Gallery and Studios at 2:32 PM