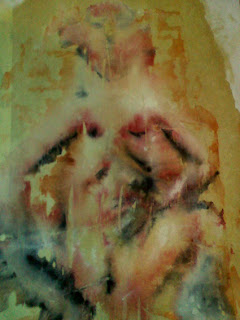 Re/Imagining Birth
An exhibition by
Martina Hynan
in the Red Couch Space
FEB 17 – MARCH 15, 2012
Official opening: Feb 18th at 4pm
This work imagines how birth was seen through the eyes of women in Ireland before medical intervention became the norm.  It engages with the empowering possibilities associated with early birth traditions and weaves renewed connections across cultures.   Re/Imagining Birth is part of my on-going work on the visual culture of birth in Ireland that I began in 2008 with Keeping Mum, Community Art Project and am pursuing through my PhD research at UCD.
The viewer is invited to gaze upon ancient traditional birth spaces taken from Sheela-na-gig imagery and the Mandorla tradition.  A Mandorla is made up of two separate circles coming together to form an almond-shaped symbol of birth.  The word mandorla is taken from the Latin for almond.  This balanced sacred space has provided women with a powerful way of visualizing birth.  My work seeks to continue this ancient tradition into the future.
Martina Hynan
Posted by Ennistymon Courthouse Gallery and Studios at 1:56 PM