Jugalbundi, a musical conversation between visiting Japanese Sitarist Yo, Mattu on Sarode and Sadanand on Tabla 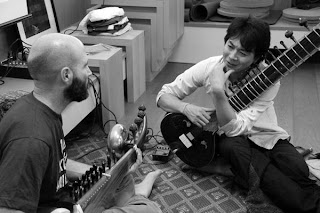 After meeting in a small village outside Kolkata in 2004, Japanese sitarist Ryohei Kanemitsu and Australian born musician Mattu Noone have had a deep friendship. The pair met while undertaking studies in North Indian Classical Music in Santiniketan in West Bengal. Each year the pair would meet again during the winter season of concerts and would encourage each other’s development and practice. In 2011, Mattu was invited by Ryohei to go to Taiwan to travel, perform and teach. This year Mattu wanted to return the favour. Mattu plays the Indian lute called sarode and has studied under the guidance of Sougata Roy Chowdhury since 2004. Mattu is well known to Irish audiences through his work with fusion group the Bahh Band and performances of Indian Classical music. Ryohei, nicknamed Yo, is based in Taiwan but has been studying sitar since 2004. Yo has been instrumental into introducing the sitar into Taiwanese music since he settled there in 2008.
Mattu and Yo will perform two concerts in Clare this July. Firstly, they will perform in the Ennistymon Court House Gallery on Friday July 27th 8pm. They will be accompanied by the Indian drum, commonly known as tabla, played by Dublin based musician Sadanad Magee. This trio will perform a jugalbundi or a musical conversation that is largely improvised and is based around the principles of raga or the emotional aesthetic that underpins all Indian Classical music. This type of performance can move between subtle and sorrowful airs to vibrant and passionate rhythmical interchanges. The duo will also perform a very special workshop and house concert in East Clare on Saturday July 28th. The workshop will run in the daytime and is for any musicians interested in learning the basics of raga and Indian improvisation. Musicians can bring any instrument they are comfortable on, an Indian instrument is not required. Entry to the concert in the evening is included in the cost of the workshop. Tickets for the house concert are extremely limited and are available by booking only.