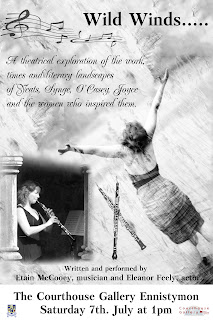 Wild Winds...a fusion of theatre and music inspired by the inner landscapes, travels and muses of  Irish writers Yeats, Synge, O'Casey and Joyce.

It explores myth and legend of the 16th century to the the Belle Epoque of Paris through the tumultuous turbulent Ireland of the early 1900's,  all performed in a physical, energetic and poised performance by oboist, whistle player and singer, Etain McCooey and actor/performer Eleanor Feely.

The piece contains also original material by both artists.

Eleanor Feely trained as an actor with the legendary Deirdre O'Connell
at the Focus Theatre Dublin and at the Theatre du Soleil .
She worked in all the theatres including the Abbey and Peacock
and on tv and film in Remington Steele, Rawhead Rex, Echoes, Glenroe ,
Nighthawks and as well as others,
In recent years she has concentrated on performing original material.
Her play ' The Changing Moon' was described by The Irish Times as
'exhilaratingly original'.
She is a director of Clare Youth Theatre where she created 'Searching
for Shakespeare' 'Ex Libris' and adapted the classic 'To Kill a
Mockingbird'.
An awareness of social jusice and the use of aural and non-verbal
imagery are defining aspects of her work..She also sings!!


Etain McCooey studied Oboe under Helmut Seeber and took master classes with Chicago Symphony legend Ray Still.  She also plays Cor Anglais and Tin Whistle.  She has been working as an orchestral player in Limerick and over the past number of years in addition to playing for various musicals and shows around the country.  She spent fifteen years in where she played in a number of bands (playing traditional and contemporary music) and worked as a session musician.  Recording work includes Frank Cullen's "And All Points West", Tony Boylan's "Life's the Teacher" and she was recently commissioned to compose music for the Hidden History TV series.
Posted by Ennistymon Courthouse Gallery and Studios at 3:59 PM