Loophead Studio
Twilight 2000 -7 min
Filmed and directed by Naoimi Wilson
In TWILIGHT we are drawn into a magical world where discarded objects and beach debris take on a life of their own. A flotsam and jetsam fairy dance is disturbed and all hell breaks loose. Beautifully filmed using real objects with a complex textural soundtrack.

Rehy Fox 2002 -6.5 min
Adapted from a tale told by Marty Keane from West Clare
Directed and animated by Naoimi Wilson
Sound and music by Brian Doyle
An ancient tale from the Loop Head peninsula about a fox who outwits all those around him. Told in drawings made of local sand

Among Strangers 2005 -11 min
Director/Writer/Animator – Naoimi Wilson
Producer Nessa King, Metropopitan Films
On a beach in the 1920's a young boy sneaks into an old fisherman's hut and encounters the magical world of the 'selchie' or grey atlantic seal. Based on a true story and told in drawings made of beach sand - the place where the world of the land meets the world of the sea...

An Cailleach Bheara 2007-  8 min
Director/Writer/Editor –Naoimi Wilson
Cailleach Bhearra was dependent on this one thing... every 100 years she must return to the water, for as soon as ever she bathed herself, her youth was renewed and she became again a young girl... filmed using pixilation and time lapse techniques with large puppets on location... treated to look like old scratched footage, AN CAILLEACH BHÉARRA attempts a poetic treatment of an ancient myth...

Sphere – 3.12min
Hoji Tsuchiya
A man working in office and he going to travel during the his work time.
Also another animation piece by Hoji Tsuchiya
Animation Works

Tides of Change - 25 min
'Casadh na Taoide' / 'Tides of Change'  by Ken O'Sullivan
from theTG4 series called 'Farraigí na hÉireann' -   Sea Fever Productions
The film is 25 minutes long and examines the changing nature of our relationship with the sea and it’s creatures from the original subsistence coast folk of 9,000 years ago and the traditions they have handed down, to the ‘super-trawler’ fishing fleet and the current state of our oceans
Break….

-5 min
is set at St. Gobnait’s monastic site and is based on the poem West Cork - Gobnaits' Bed ; Rag Tree ; Holy Well  by the late Seán Dunne
Filmed and edited by Carles Casasin
Voice and original soundtrack by Mick O'Riordan
Produced by Tony Kirby of Kilnaboy

Ollie Age Seven - 2.30 min
'Ollie Age Seven'.a film by James Skerritt
This is a short film about surfer Ollie O'Flaherty as his seven year old self talks about the winter ahead.

Tom Duffy has travelled the roads of with his family circus  since the day he was born. His ancestors have made the same journey  since 1789. 'Circus Man' moves through Tom's memories as he fights to stay on the road.The film subtly explores his world, as thoughts of tradition, family,  home and his ailing body occupy his mind..Circus Man presents a unique insight into the curious and enduring  world of traditional circus."
Twopair Films
Jill Beardsworth and Keith Walsh

A Room in Air - 22 min
In the summer of 2010 poet and visual artist Frank Golden left the Auxiliary Workhouse in Ballyvaughan
where he had lived for over a decade. He wanted to mark his departure from this stark and still resonant space.
He decided to make a film.
When the space itself had been fully prepped Golden cast the film, co-opting the talents of seven local actresses, Theresa Leahy,

Aja Daly, Marie Flanagan, Judith McGann, Jenny Morton, Tamar Keane, and Dympna Hyland.
A ROOM IN AIR, which runs to 22 minutes, is in two parts. The first part is contemporary, the second a symbolic re-enactment. The film explores the R way in which the famine proved to be a psychic and emotional fault line for and its people. It suggests that the implosion of society which occurred during the famine, and the institutionalisation which was initiated through the workhouses had a lasting impact.
Writer – Frank Golden
Filmed by Fergus Tighe

at 9.45pm
Melodious Conversation  -1min
The poetry of a conversation with the melody played on violin mimicking the human voice.
Josie O'Connor

The Road of Souls - 18min
The Road of Souls' is about a moment in time that captures the imagination of an eleven year old boy. The story follows Patrick as he discovers a stranger in his life has more to offer than he first thought. Set in in the 1950's, the film is a charming tale of childhood memories and the moments that we remember forever. The cast is lead by 11 year old Emmet O’Doherty who shines as Patrick 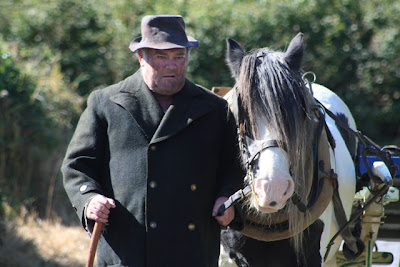 
Posted by Ennistymon Courthouse Gallery and Studios at 5:22 PM