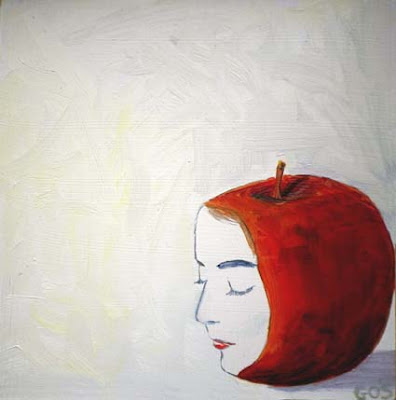 In The Red Couch Space

THE MARK OF
An exhibition of paintings

Ever wondered why the apple is such a strong symbol in our society… the Garden of Eden has a lot to answer for.
The story of Adam and Eve establishes a way of thinking about gender that advocates disparity and has left its mark globally on gender identity down through the ages. This way of thinking is encoded into society’s psyche so long now, that we can hardly identify the effect it has had on meaning, particularly what it means to be male or female.

Agreement is reached by consensus as to the meaning of ourselves and the things around us, and the meaning is continuously changing. The self is not absolute or fixed but is constructed over time through the repetition of visuals and words. The basic structure of the self is set down in childhood through observation. These observations build up an impression of how we should behave and where we fit in the power structures that form the glue of society. As we mature, this basic structure is continuously reinforced or challenged by what we see and hear every day. 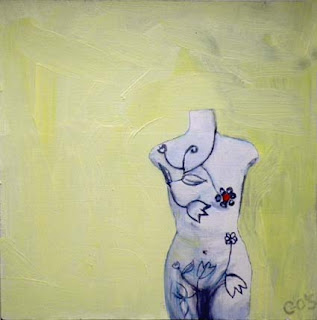 This new exhibition of work is a result of a combination of the artist’s interest in the power of visual representation and religious belief systems, as well as a fascination with signs and symbols, myths and illusion which are important elements in the work to create layers of meaning. At the core of the exhibition is the argument that by portraying groups repeatedly in a certain way, either positively or negatively, the group may be sufficiently influenced to behave accordingly. The work is an attempt to interject in the everyday, causing the viewer to consider, question and reflect. 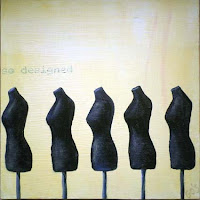 Grace          O’Sullivan graduated from the Limerick School of Art and Design in 2006 with a BA in Graphic Design and this training is evident in her painting where the idea is everything and colour palette is minimalist. She went on to complete an MA at MIC/University of in Media and Communication in 2008. Her MA thesis was an analysis of newspaper visuals and was presented at the International Communication Association Conference in in May 2009. This study has had an enormous influence on her photography and painting. Grace has exhibited work in group shows throughout and had her first solo show last year in The Ivy House in .


Posted by Ennistymon Courthouse Gallery and Studios at 6:10 PM