We hope to see you but if you can’t make it to the launch, you can order directly from: 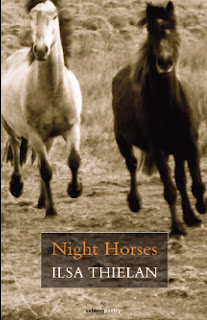 Ilsa Thielan's poetry, like her renowned photographs, embraces a variety of landscapes.   She is well known for her photographs of the flora and fauna of the Burren in Co. Clare, .  Her poems have a lyric intensity and beauty that capture the presence of this unique landscape.  As well as her careful appreciation and commitment to her Burren home, Ilsa Thielan is an adventurous traveller. For many years she has spent time on her own in the wilderness of Northern Canada and explored the landscapes of , North Africa and .  Her photography and poetry exhibitions include a homage to the people she met at the Festival au Desert, 65 kilometers beyond , in the vastness of the .  She has attended the legendary Festval of St. Sara,  also known as the Festival of the Gypsies, in  Saintes Maries de la Mer, Carmargue in the South of  France, an area famous for it's beautiful white horses.  As indicated by the title of this collection, horses appear often in Ilsa Thielan's poetry; a freedom both real and metaphorical. In this, her first poetry collection, she shows her love for the wild  places, for people who live closely with nature and the animals who aid and inspire them.

Bio:
Ilsa Thielan studied literature and art in her native . She moved to in the 1970s and settled in Doolin, Co Clare.  Since then she has gained a considerable reputation as a photographer of the Burren and North Clare landscapes, and has written and published poems and short stories. She was an early member of  the North Clare Writers' Workshop, Ennistymon. Her poems and stories appeared regularly in the North Clare Writers' annual  anthology. Her work has been published in many journals, including Stet, Women's  Work, The Burren  Meithal, Revival,  and with the North Clare 'Three Legged  Stool Poets'. Her poem 'My Brother' was published in Dogs Singing: A Tribute Anthology (Salmon Poetry, 2010).

She has read her poetry at The Cuirt International Festival of Literature, the Ennis Bookclub Festival, Glor Music Centre and the Courthouse Gallery, Ennistymon.

Her poetry and stories are born out of her experience and observations
of life, the natural environment of her Burren home, her love for the animals whose paths she has crossed, her relationships with people she met on her travels, and her time spent in the American Southwest, the Sahara of North Africa, and the Canadian wilderness.